The painting titled “Wonderful Cats” by Rohit Nair, received an Honorable Mention in Khula Aasmaan drawing and painting competition for April to June 2020. 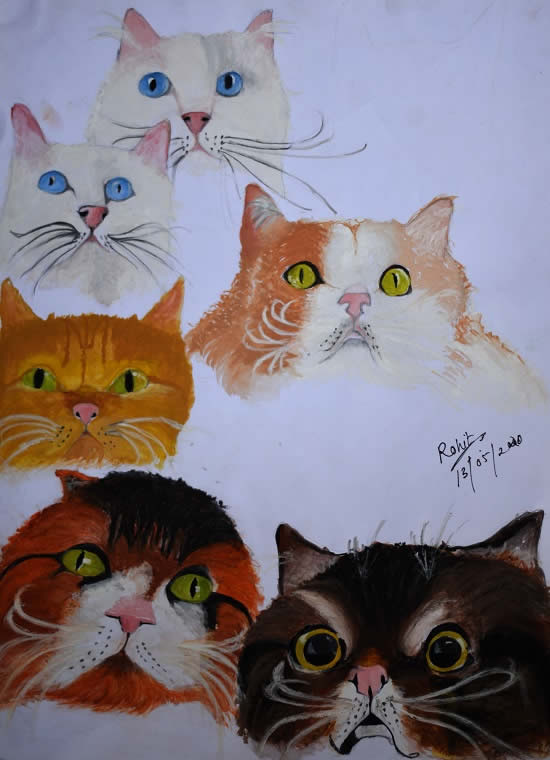 Title: 6 Wonderful Cats
Medium: Poster colours & Colour pencils
Size: A4
Description: My picture depicts a loving nature towards animals. The painting was inspired by a Korean youtuber 'Clarie luvcat' whose videos depict 'Life of 7 adorable cats'. This painting is my hard work. During this lockdown I improved myself a lot in painting and portrait. 'Painting' was one of my big parts in the drawing but thanks to lockdown through which I improved myself in painting, thank you for shortlisting artwork. I hope you like my original one.

Rohit Nair on his painting of cats

Listen to Rohit Manikandan Nair (16 years), Model English School, Mumbai, Maharashtra, as he talks about his painting of cats.

Morgan Freeman is an American actor, director, and narrator. He has appeared in a range of film genres portraying character roles and is particularly known for his distinctive deep voice. Freeman is the recipient of various accolades, including an Academy Award, a Golden Globe Award, and a Screen Actors Guild Award. Some of his notable film performances include films like Driving Miss Daisy, Unforgiven, The Shawshank Redemption, Amistad, Million Dollar Baby, Invictus, The Dark Knight Trilogy.