Ghufran was the first-born child of a conservative Luckhnavi family. His father worked for the postal department in the railways while his mother was the daughter of a renowned Islamic cleric of the city. His childhood experiences were limited to the rudiments of grammar and literature in Urdu and Arabic. Moments from his childhood most often recollected to me were somehow related to those long summer afternoons spent flying kites despite his parents' reprimand. These were some of those rare instances where he could express freely. The kites symbolised to him the extent of human potential and control, the celebration of individuality, and the rhythm of flight. With the advent of the youth, the assertions for independence often placed him in situations conflicting with his environment and personality. Ghufran began to force upon himself the belief that he wanted to become a medical doctor; failure left him frustrated and discontent. This got channelized through his cathartic passion for cinema where a character of an artist played by Dilip Kumar inspired this young man to pick up paints and brush. Encouragement was sought in a confidant outside the family.

Entrance into Lucknow Art College was critical to the life events that followed. This ventilation to the years of suppression was exhilarating enough to often manifest itself through outbreaks of rebellion as well as joyous celebrations of freedom. “Baroda gave me my identity” he says. It was at MSU, Baroda where he felt that people acknowledged him for what he was. This helped him nurture the divergence in his thinking that was until now snubbed for what people thought as deviation from the 'normal'. He relieved himself of the piled-up concerns of life through a series of works tiled Worries of Life. With resolving these conflicts, the 'self' arrived at peace within various stages of consciousness. Expression sought for more than one medium, and that is how the shayar (poet) evolved in him. Ghufran Lucknavi, as he came to be known, had an active circle of friends with whom he participated in several Mushairas. He has penned many stories and ghazals that have been published in several magazines over the years. Urdu poetry made expression easier and helped the artist analyse his thoughts within a variety of contexts. Ghufran Kidwai's works reflect his experiences in life.

His work and influences

Destiny had arranged for him encounters with patients of leprosy, an experience that disturbed his entire being. The unequal treatment by society towards leprosy patients touched his heart. For a person who had traversed vast distances to achieve a sense of confidence and self-esteem, the social apathy towards the exiled lepers created a revolting upsurge of questions. He made enquiries into how structural deformities of one's hands and fingers deprive him/her of his/her self worth and identity. He asked himself, “What is the significance of forms and images in relation to the surrounding social constructs?” Since then Ghufran Kidwai started using physical deformities as means of work of art. “Most people think that physical deformity destroys real beauty; however “deformity to me is a complex journey of the human body and what it endures”, says the artist.

His work is misleadingly straightforward. He has committed to exploring the power of image and form, bold (and ugly) and beautiful, manoeuvring the attention of the viewer to look for function in distortion. Considering 'deformity' as a natural inherent phenomenon in life forms, the artist combines fingers and toes to create several kinds of birds, animals, and human forms, in isolation as well as in social engagement. The emphasis shifts from nails to fingers to torso with respect to the dialogue created. At first sight, Ghufran's sculptures are grotesque. When viewing his work, the eye sees the imperfection of his fingers, the use of the structural deformities and distortion of the form. They are unpleasant, unnatural, and exaggerated, upsetting and shocking the viewers. In a conventional sense of art appreciation, the creation of images via fingers and toes violates the notion of beauty. Kidwai makes no attempts to conform with the conventions of decorative art. His sculptures and paintings are a far cry from the academic styles, bordering the modern and experimental.

With time and differentiation of roles from a student to a teacher at the Faculty of Fine Arts, Jamia Millia Islamia in New Delhi, Ghufran Kidwai attained successive levels of maturity both in his thought and work. He experimented with varying materials and techniques to develop expertise in every stage of an art work. He laboured as a stone cutter, a wood carver, and a metal caster. Some of the materials he uses regularly are: bronze, aluminium, plaster of Paris, fibreglass, wood, marble, sandstone, granite, terracotta, oil paints, acrylic and canvas. The underlying constancy in this miscellany is his obsession and research in exploring meaningful representations of fingers in sculptures and paintings. In continuation with the spirit, the present collection of works brings out an aspect that has generally been elusive to the world. Ghufran Kidwai moulds his representations in the rhyme of his poetic couplets that further the definition of the forms. He uses calligraphic Urdu and Hindi to garb the sculptures with a complimentary meaning and an added elegance.

This series of works seems to have overcome the shocking repulsiveness that was experienced during the initial encounters with his sculptures. More interestingly it leaves one confused and uncertain of his/her notions of beauty and repulsion. Characters from the Arabic (Yaseen, Ali and Fatima) have also been rendered sculpturally through the mould of the figures (fingers, curves of nails and the palm of hand) themselves. The visual ideogram is interesting and unconventional. At the same time several of his current works are quite political, depicting exploitation and subversion. These themes force viewers to question their beliefs and positioning in this unequal and exploitative world.

While this series remarks the confluence of words and visual form, the integrity in the composition speaks of the compliment, rather than dependence between the two. Each form of expression supports the other in peace and harmony without losing its autonomy. It may be said that several layers and shades of his personality have befriended one another to adorn the frames and pedestals of the show. The subjects do not come from a singular theme or perception but from several 'white moments'. Prof. Ghufran Kidwai is obviously a restless spirit. He brings with this collection the influence of Islam and Lucknow culture, his experiences as an agitated rebel and a composed Shayar, the projection of his reproof of the social convention that isolates the feeble, the diseased and the deformed, and the skill of a laborer and the weapon of an artist. The work stimulates through its enclosure of allegorical discoveries left free for a multi-interpretive response by the beholder.

The Art of Parallel Consideration

Ghufran's sculptures force us to an alternative parallel state, where he articulates the realities of life - deformed and diseased - which in itself is an unconventional theme to represent through art. From another perspective, his art portrays how a harsh and challenging life prepares an ordinary person for extraordinary conditions. What sets him apart from his many contemporaries is the independent character of his work and artistic expression. He seeks inspiration from the faintest glimpse of hope of acceptance in the sorrow of the diseased and the lonely. His artistic expression has immense depth of character conveying the emotional and spiritual state of his subjects so eloquently. To create those expressions he uses hands and all its appendages. This has been his signature style for over thirty-five years of his career.

A number of his works portray bondage. Ghufran Kidwai believes that his heavy, strong, stressed, self-contented sculptural figures carry a sense of reading. He himself being an Urdu poet (Shayar) incorporates Urdu calligraphy into his sculptures. He does not let the calligraphy narrate the artwork, but creates a pattern by knotting the alphabets all over the sculptures. For this purpose he even distorts calligraphy accordingly. The beautiful amalgamation of calligraphy as ornament creates a unique aesthetic appeal to his work.

His figures represent lyrical stylization exaggerating the length and volume. He has used the same technique in his 'Mother Teresa', made in fibreglass. This sculpture, a message of peace, with the outward-facing slightly open palm, depicts the fearless and protective gesture of love and compassion.

His sculpture 'Shaheen', a beautiful bird, with one feather collapsed is indicative of the reality that no beauty is flawless, and at the same time, a flaw does not take away from the beauty of a person. The graceful chiselling with calligraphy shows the brighter side of the bird. Similarly, in the sculptures like 'Family' and 'Friends', his characters are ignored and isolated from the society, yet seem content and engaged in their own spheres.

The sculptures of Ghufran Kidwai express deformity as a cause of pain, yet it is alluring, desirable and tempting. He has experimented with multiple media like marble, bronze and fibreglass to discover new possibilities. The artistic skill represented in his 'Ludo' is tremendous. It can be perceived as a game for enjoyment and also depicts the reality that a life of a person fluctuates between possibilities very much like the dice in the game. He created human finger shaped small bronze figurines as tokens. The board or the base of the game is made of wood, colored in red, yellow, green and blue. It's a whole world out there! An interesting sculpture 'Triplets' in bronze is a comical representation of three new- born babies. The eyes of the babies are closed and their bodies are carved out in the shape of a fist. This sculptural work represents that every human being enters this world with his or her own destiny in their hand. At the same time this work leaves one to think about the nature-nurture dilemma. These three babies, coming from the same place, yet inherently different, are waiting to shape and discover their lives. Where will they end up? What will they make of themselves? What are their possibilities? Such fascinating questions!

The sculpture 'Music-recitation' represents that music belongs to those who value it and enjoy it in every aspect of life. They may be broken or diseased, but nobody can take from their love and passion for music. 'Bliss' is one of his apparently simple yet captivating works. Two figures looking in opposite directions enjoying the moment of delight and peace. This work is a brilliant portrayal of a wordless conversation between the two characters of the story.
Ghufran Kidwai speaks through his work, “What we conceive as a meaning is not always there, it's somewhere else. It is just being human. The way we perceive, sometimes reality creates the meaning, and sometimes the meaning constructs reality”. 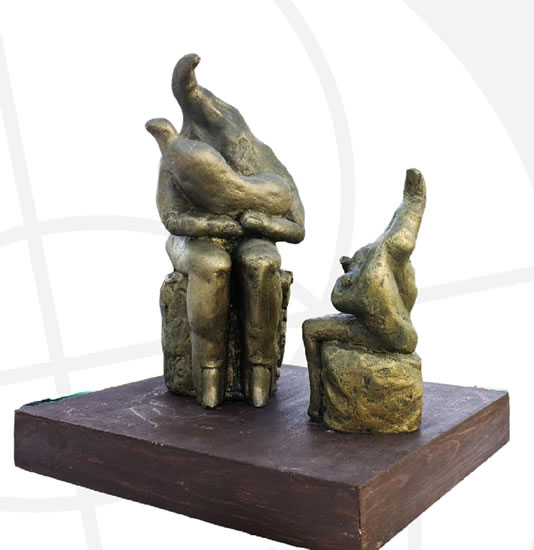 Hum do hamare do, Sclpture by M G Kidwai 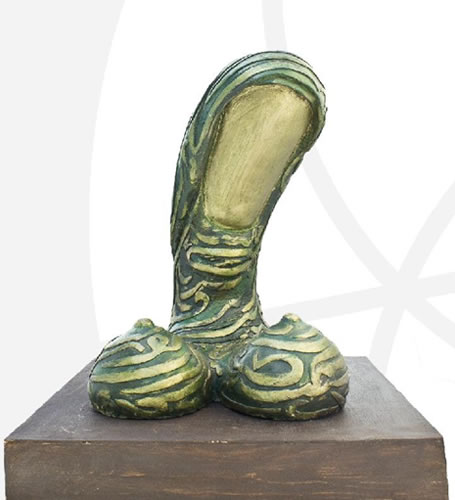 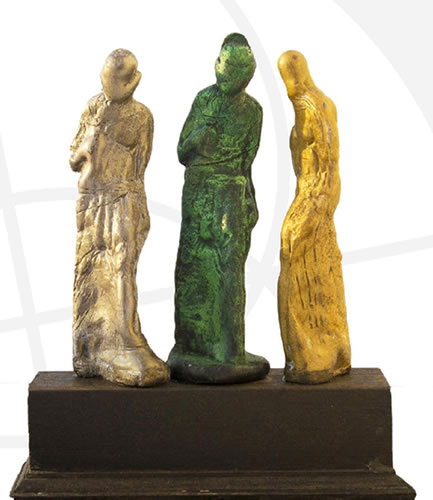