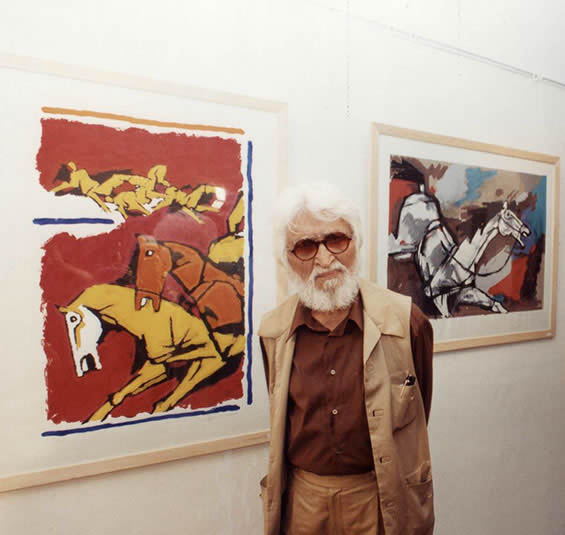 Maqbool Fida Husain, better known as M. F. Husain (17 September 1915 – 9 June 2011) was an Indian painter, regarded as India's most prolific, controversial, and world-renowned artist. He was a modern Indian painter of international acclaim, and a founding member of Bombay Progressive Artists' Group.


A series on Old Havelis (Mansions that were once an abode of the royals and wealthy), a series on life and times in a city, paintings of school children and their childhood.... Anwar's Goa series created a degree of permanence, portraying the feel and flow of life with all its colourful nuances and experiences. In his paintings on Mumbai series, each work bears a stamp of sensitive treatment of the subject and his inner feelings coming out gently on the canvas.... Anwar was born in 1975 in a small village called Budhgaon, near Sangli, surrounded by the nearby princely states of Miraj and Aundh. His favourite mediums are Oil & Acrylic on Canvas and Watercolour on Paper. Anwar's palette of colours brings a breath of freshness to all his paintings.

Husain is associated with Indian modernism in the 1940s. His early association with the Bombay Progressive Artists' Group used modern technique, and was inspired by the "new" India after the partition of 1947. His narrative paintings, executed in a modified Cubist style, can be caustic and funny as well as serious and sombre.

Husain is associated with Indian modernism in the 1940s. His early association with the Bombay Progressive Artists' Group used modern technique, and was inspired by the "new" India after the partition of 1947. His narrative paintings, executed in a modified Cubist style, can be caustic and funny as well as serious and sombre.

His themes—sometimes treated in series—include topics as diverse as Gandhi, Mother Teresa, the Ramayana, the Mahabharata, the British Raj, and motifs of Indian urban and rural life.

Husain's later works have stirred controversy, which included nude portrayals of Hindu deities, and a nude portrayal of Bharat Mata. Right-wing organizations called for his arrest, and several lawsuits were filed against him for hurting religious sentiments. He remained in a self-imposed exile from 2006 until his death in 2011, accepting Qatari citizenship in 2008.

In 1967, he received the National Film Award for Best Experimental Film for Through the Eyes of a Painter. In 2004, he directed Meenaxi: A Tale of Three Cities, a film he worked on with his artist son Owais Husain, which was screened in the Marché du film section of the 2004 Cannes Film Festival.

Hussain was born on 18 September 1914 in Pandharpur, Maharashtra to a Sulaymani Bohra family who traced their roots back to Gujarat within the last 200 years, and then originally to Yemen. He picked up taste in art through studying calligraphy while he stayed at a Madrasa in Baroda. Husain attended the Sir Jamsetjee Jeejebhoy School of Art in Mumbai. Early in his career, Husain painted cinema posters in Mumbai. To earn additional income, he worked for a toy company designing and building toys. He often traveled to Gujarat to paint landscapes whenever he could afford to travel. Husain developed his painting skills in the 1930s, painting billboards for the growing Bollywood film industry. This was a clique of young artists who wished to break with the nationalist traditions established by the Bengal school of art and to encourage an Indian avant-garde, engaged at an international level.
The artist cite "The Partition" of India and Pakistan 14 August 1947, with its resulting religious rioting and heavy loss of life as their reason for forming The Progressive Artist's Group in Bombay in December 1947. The artists saw the Partition as a "turning point" for India, and their new style of art was urged on by, and was also a turning point for, (modern) Indian Art. Husain's first solo art exhibition was in 1952 in Zurich. His first U.S.A. exhibit was at India House in New York in 1964. His biography "Maqbool", written by Akhilesh, is the most appreciated book published by Rajkamal Prakashan, New Delhi. 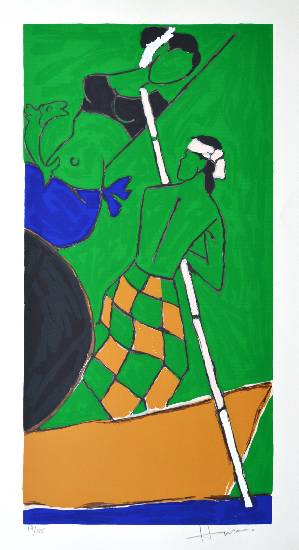 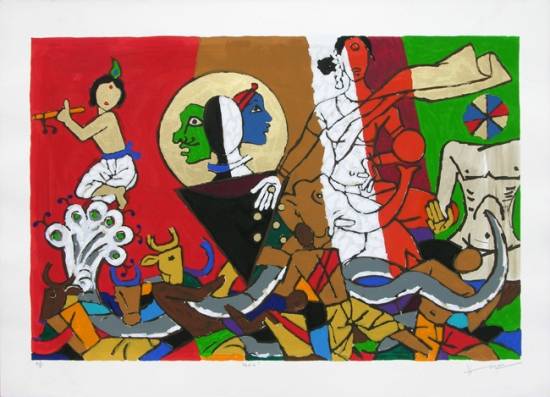 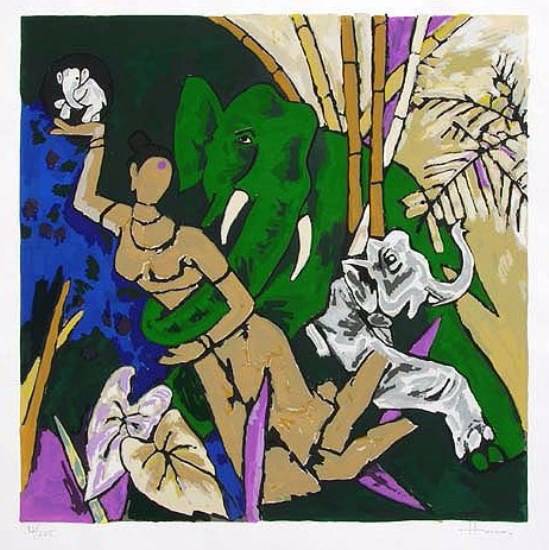 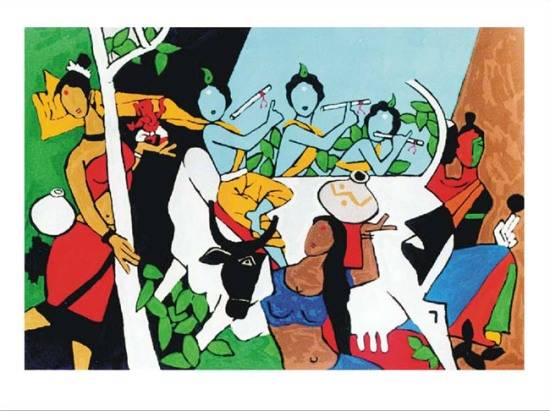 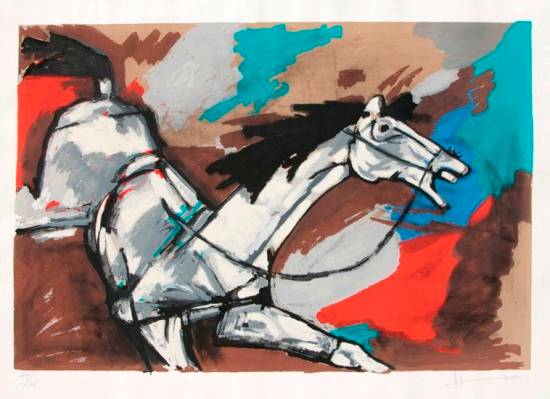 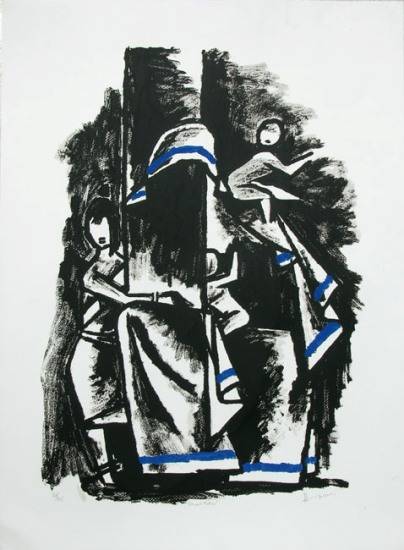 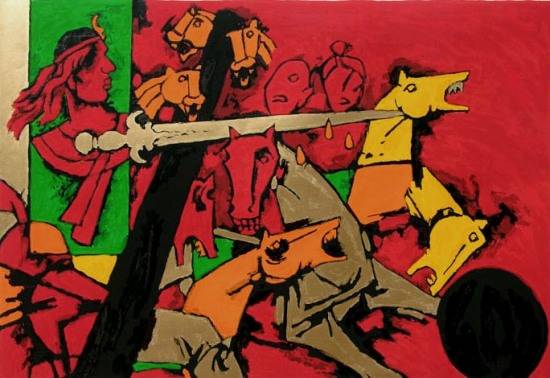 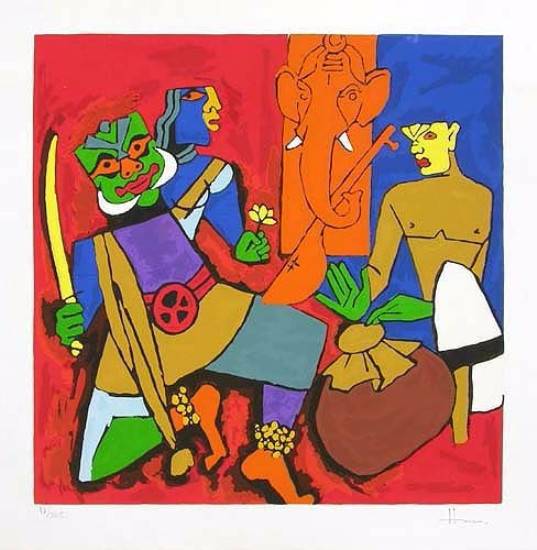 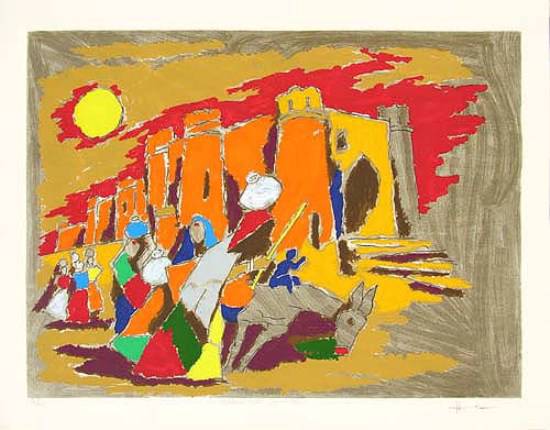 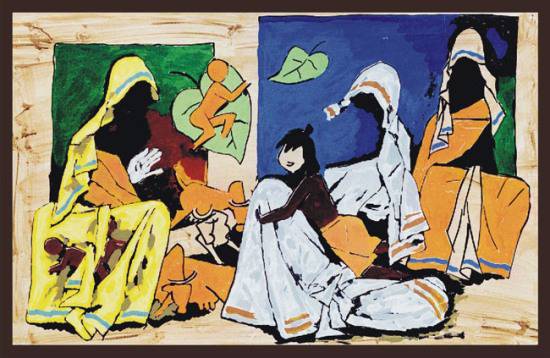