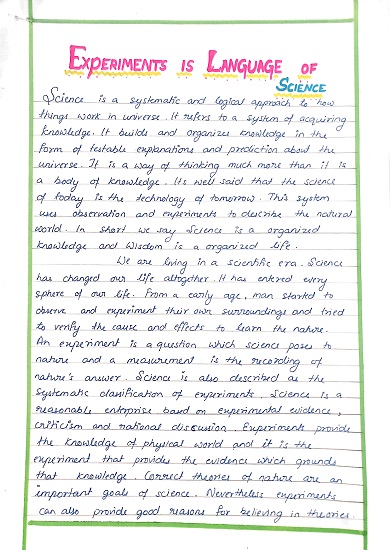 Experiments is Language of Science

Science is a systematic and logical approach to how things work in the universe. It refers to a system of acquiring knowledge. It builds and organizes knowledge in the form of testable explanations and predictions about the universe. It is a way of thinking much more than it is a body of knowledge. It’s well said that the science of today is the technology of tomorrow. This system uses observation and experiments to describe the natural world. In short we say science is organized knowledge and wisdom is organized life.

We are living in a scientific era. Science has changed our life altogether. It has entered every sphere of our life. From an early age, man started to observe and experiment with his own surroundings and tried to verify the cause and effects to learn about nature. An experiment is a question which science poses to nature and a measurement is the recording of nature’s answer. Science is also described as the systematic classification of experiments. Science is a reasonable enterprise based on experimental evidence, criticism and rational discussion. Experiments provide the knowledge of the physical world and it is the experiment that provides the evidence which grounds that knowledge. Correct theories of nature are an important goal of science. Nevertheless experiments can also provide good reasons for believing in theories. Experiments can also call for a new theory either by showing that and accepted theory is correct or by exhibiting a new phenomenon which needs explanations.

Scientific experiments promote the development of scientific thinking and help us to understand the things and the world around us. It promotes new discovery and learning. As we know It’s a complex world and there are many things that could be influencing phenomena, but in reality only a fraction of those things do. Scientific experiments systematically identify those few things. So, experiments are called the language of science as they are at the core of scientific methods. Experiments are a special kind of observation that is to interrogate nature in a specific kind of way.

By using experiments, we aren’t doing anything fundamentally different, we are still observing what nature has to tell us about the world we inhabit, but we are trying to set up conditions that are meant to clarify what nature is saying. In this view, we can say that experiments are nature’s interpreters.
Success is science, if you have the conditions you can get the results. Science is the great anticole to the poison of enthusiasm and superstition. Research through experiments is formalized curiosity, it is poking and prying with a purpose. Experiments may have come to be thought of as the defining feature of science but they are really just a special case of something we all do everyday - observe the world around us. As a nature's speech therapist, experiment becomes a language of science.

Listen to "Experiments is a language of science", essay by Devika Nair