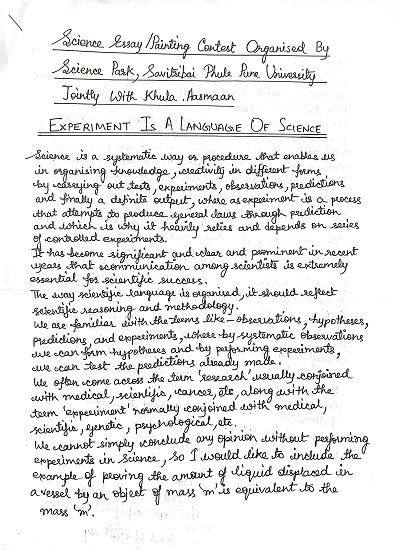 Experiments is Language of Science

It has become significant and clear in recent years that communication among scientists is extremely essential for scientific success. The way scientific language is organised, it should reflect scientific reasoning and methodology.We are familiar with the terms like observations, hypotheses, predictions and experiments, where by systematic observations we can form hypotheses and by performing experiments, we can test the predictions already made. We often come across the term ‘research’ usually conjoined with medical, scientific, cancer etc. along with the team ‘experiment’ normally can joined with medical, scientific, genetic, psychological etc.We cannot simply conclude any opinion without performing experiments in science so I would like to include the example of proving the amount of liquid displayed in a vessel by an object of mass ‘m’ is equivalent to the mass ‘m’. Say for example, we place an object of mass ‘m’ in any liquid, where some amount of liquid gets displaced. Now this is our observation. Let us predict or assume that the amount of liquid displaced is equal to the mass ‘m’. Now, by performing repeated series of experiments, we can conclude that our prediction turns to the true. This example is famously named as Archimedes principle. Other such examples are that sublimable substances around us like camphor , iodine naphthalene etc. directly change from solid state to gaseous state, by the process of sublimation. Now this is not directly confirmed without carrying out experiments. Naphthalene balls when kept in the cupboard in order to prevent insects, do not change their state but that of the camphor when heated during puja, gets converted into a gaseous state. Every time, new organic compounds and drugs are synthesized to cure unknown disease followed by the modification of old drugs in order to minimize the side effects of compounds and to alter their rate of chemical reaction by carrying out various types of controlled experiments. I took these examples in my essay to support the topic - “Experiments is a language of science "

Listen to "Experiments is a language of science", essay by Aishani Choudhary